I'm not fancy enough to have people beating down my door (metaphorically) and emailing me to design/pretty-up my site (literally), so sorry for the annoying "this photo is no longer available" posts where my cute wallpaper used to be. I learned how to change the background to my blog ONCE BEFORE, isn't that enough? And I'm too impatient this week to relearn it. Aren't I glamourous? Do you want to hear about how I clean my bathroom? I have three steps. . . I'm just kidding. That's classified, special information I'll save for my book.

But I did get a new hairdo for the Spring. Yes, I am a predictably female and getting my hair done makes me feel better on the inside, too (not so mysterious now). And here I thought I had Seasonal Disorder (SAD), but turns out I forgot to cut or color my hair for 6 months! Whoops! 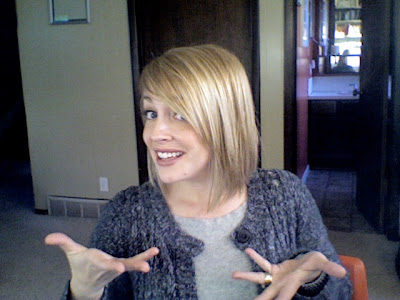 I haven't had short hair for a long time, and I forgot you have to "do" it. No more ponytails. Wow--this could be a WILD SPRING! I had enough energy to sign some kids up for Spring Soccer and Track. I don't know if I'll be able to go through with it, but signing up is good intention enough for today.
Posted by Lisa at 4:00 PM 10 comments:

I just guest posted for CJane, my sister-in-law (I'm sure you already know the link) and I wrote about Valentine's Day which, incidentally, has me thinking of Valentine's Day and how I see it differently now that I have my own kids.

My son Miles is sending his first Valentine to a girl, on purpose and not in the obligatory you-have-to-give-everyone-in-the-class-a-Valentine-sort-of-way. It's one of those Student Council pink cookies kind of thing and he's giving it to her anonymously. I'm trying not to act too excited, but I don't hide my facial expressions too well. Topher tells me that the more I want to talk about girls with the boys, the more I'll be disappointed.

Owen has spent approximately 38 hours on his class Valentine's box because he's trying to incorporate a mechanical mechanism in it that will "spin" the candy. This is completely his own idea. I just give the kids a shoe box (only one had a lid--I don't keep shoe boxes, I'm a minimalist!), some paper I have lying around, markers, paint, and tell them to go to town. This year I was really special and got some stickers. The kids were impressed. Not "scented, colored doilies" impressed, but "Hey, Mom actually bought some heart stickers!" impressed.

Phoebe would hand write a thank you note to everyone in her class if she could because she's nice and genuine. She actually thought about who would get each Valentine and if they would like the one with a free coupon for a donut or hot chocolate best. I really like that about her. It would never occur to her that some kids (boys) would just write their name on a random Valentine and give it to "whoever." I love that I bought donuts one day weeks ago at Krispy Kreme and they gave me enough Valentine's to give to all my kids' classes. That was super convenient. Things like that make me loyal to a store (I'm not joking).

Hugh wrote his name on each Valentine, as suggested by his teacher, which I thought was weird. She made the suggestion that they don't try and write each kids' name, but just their own name over and over to practice. I'm all about "lowering the bar" and everything but for me, not my kids. Also, it's a Valentine--shouldn't they just be able to do whatever they want without it being turned into homework? First the greeting card companies, now THE SCHOOL wants to be the boss of Valentine's Day? Sheesh.

I got Margaret a pink t-shirt with a kitty on it for Valentine's Day that says "I'm purrrrrfect!" which I'm normally opposed to (cheesy t-shirts with stupid sayings), but since she thinks she's a cat most of the day and she has been potty-trained for weeks now (SUCCESS!!!) and it was on sale for $2.50, she has it. Valentine's Day will most likely be a regular day for Margaret: She will be mostly naked, won't let me brush her hair, and will meow when she wants food, and hide under the furniture when I tell her she can't have a popcicle.
Posted by Lisa at 8:20 PM 17 comments: